Sergey Petrossov is the 28-year-old founder and CEO of JetSmarter, a Fort Lauderdale-based private jet transportation marketplace. JetSmarter launched in 2013 and is valued by investors at $1.5 billion. In venture-capital terms, this makes it a “unicorn”, which is a private company valued over $1 billion. 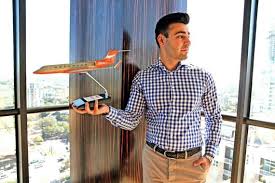 In 2015, JetSmarter had around 50 employees. Most of all of their cities launched in 2016 and since then they have done massive hiring all over. Petrossov said, “When you go all-in as an entrepreneur, you don’t look back.” The company today has more than 260 employees.

Sergey Petrossov took his first ride in a private jet at the age of 21 in the year 2009. He said, “At the time, I didn’t know it was going to be a business.” At that point, he had just graduated from the University of Florida when he was offered his first ride by the owner of a private jet company. He said he was “quickly struck by the archaic nature of the industry” and saw the opportunity for advancement, realizing that “there needed to be a sharing medium.”

Teaming up with hundreds of vendors and members that had more than a combined 100 years of experience in private jet travel, Sergey Petrossov decided to turn JetSmarter into a full-fledged business and officially released the JetSmarter app in March 2013.

With investors like rapper JayZ and the Saudi royal family, The JetSmarter mobile app now connects travelers to private jets around the world at competitive fares in more than 170 countries and even offers their members complimentary helicopter services.